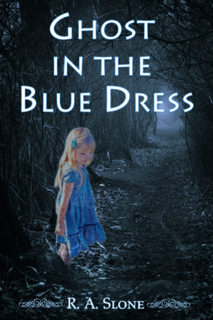 It’s scary to sit down and face a blank screen. Will the ideas come? Where will I get them? Can I order them online and get free shipping while I’m at it?

The idea for Ghost in the Blue Dress originated from a dream, and the idea for Boots, Blood, and a Sister’s Love came to mind when I stepped outside of our small-town movie theater and saw a ton of bats. There had to be at least a hundred flying around and around above an old city building. And the idea just popped into my head.

I came home and wrote the paragraph that I had composed in my mind (writers know exactly what I’m talking about) while standing there staring at the strange sight. I never thought I would have a story idea that involved vampires, but I’m not going to discard it just because vampires have been done to death (Ha!). You know why? Because no one else can write my vampire story. Only me. I was the one standing there to witness the scene, so I’ll be the one to write the story. Find my book on Goodreads here.

Buy Ghost in the Blue Dress: